It was 1966 when O’Neill broadcasters Larry Rice, Gil Poese and Carlee Mathis began the application process to the Federal Communications Commission to develop a radio station in Ainsworth, Nebraska.

KBR Broadcasting Company was formed and the FCC approved the full-time KBRB AM radio station at 1400. Construction began in 1967 with the tower and transmitter located about a mile east of Ainsworth. A downtown business building at 122 E. Second St. was remodeled for the studio and offices.

A telegram from the FCC arrived on February 5, 1968 authorizing the start and at 6 AM Tuesday, February 6 the original staff of Larry Rice, Jug Brown, and Ken Heuer took turns on the air each day broadcasting music and news from 6 a.m. until 10 p.m.

It took only a couple of weeks to realize that someone was needed to do the paperwork, daily programming logs, and general front office duties. This position was filled by Renee Burger. To help share the evening and weekend on-air shifts we started our first crew of part-time student workers from Ainsworth High School…Bill Ganser, Gary Pischel, and Jerry Schumacher.

In July of 2009, Larry Rice and his remaining partners in KBR Broadcasting Co. sold KBRB Radio to former employee Graig Kinzie of Sandhills Broadcasting LLC. Kinzie worked for KBRB beginning in 1996 while attending Ainsworth High School, and was one of the numerous KBRB high school employees who went on to a career in journalism. After attending college and then working in newspaper journalism for seven years, Kinzie returned to Ainsworth to purchase KBRB. In October 2014, a fire at the Royal Theater next door damaged the KBRB studios at 122 E. Second St. KBRB completed the construction of a new studio at 356 S. Main St. in January 2016.

The mission and goal of KBRB has been and continues to be to provide complete local community service to all residents of the area through its radio broadcasts, and also to former residents and others with an interest in north central Nebraska via the Web at www.kbrb.net.

* On Jan. 13, 2021, Sandhills Broadcasting, licensee of KBRB AM 1400, FM 92.7 and translator K292HE 106.3 FM in Ainsworth, Nebraska, filed an application with the Federal Communications Commission for renewal of license. Members of the public who want to view this application or obtain information about how to file comments and petitions on the application can visit https://publicfiles.fcc.gov/fm-profile/kbrb-fm

* To view KBRB’s public file, which includes the quarterly issues and programs list of topics covered with community relevance, visit https://publicfiles.fcc.gov. Call KBRB at 402-387-1400 with any questions.

* All content originally produced by KBRB staff on www.kbrb.net may not be rebroadcast or published without contacting Graig Kinzie at KBRB at 402-387-1400. 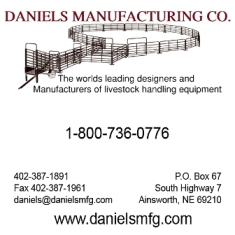